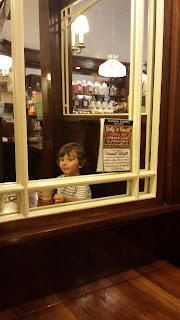 The little guy was in the booth kitty corner from mine. There was a mirror on the wall beside each table and I caught him watching me in the reflection. Smile on his lips and cherry ice cream on his chin; I guessed he was about three. Every time I snuck a glance, there he was with his shining eyes on me.

Lowell made me promise when he left for Afghanistan that I would treat myself to something every single day. Just until he returned, I had to treat myself as well as he treated me. That’s how he put it, with that self assured smirk of his that made me want to kiss him. I was terrible at taking care of myself, of checking in with my own consciousness and seeing to its needs. Lowell was always calling me out on it. He was the one who made sure I came home at ten on the fifth night after four nights of working on a case until two a.m. He’d pack my lunches then text to remind me to eat. If I made an absentminded remark on needing a haircut, the next week I had a voicemail from my salon with an appointment reminder for a cut and a manicure.

While he’s been away, I have tried to keep my promise. I kept a calendar and wrote on each and every square.

September 3: Finally replaced my running shoes that I have complained about for months. The new ones are pink.

November 22: Went to our favorite coffeshop by myself for the first time since you left.

December 11: Came home early from work with a migraine. When it let up, I didn’t go back to the office. Stayed on the couch in my pajamas and finished the novel I started when you were still here.

February 14: Found the exact same truffles you bought for me last year. Ate one for you and one for me.

April 30: Attempted two recipes from Pinterest from the hundreds I have saved but never tried. Results were tasty.

May 6: Painted my nails in the color I wore on our wedding day.

June 25: Caught up on casework at home instead of at the office since it’s Saturday. I watched hours and hours of my favorite TV shows while I finished it all.

And today. July 2: Left work at 6:30 and stopped at Beernsten’s for ice cream. Again and again, I smile back at the little boy in the mirror. His cheeriness is contagious. This is the last day, the cherry on top of all the good moments I’ve clung to in the last year. I already know what I’ll write on the calendar tomorrow.

July 3: Picked up Lowell at the airport.