The weather yesterday, high 30s and sunshine, had me longing for a run. I settled for a superb, solitary walk on the mostly clear rec trail. I kept at a steady clip around a four mile loop I used to run on a lunch break sometimes.

Once the pavement was under my shoes, the ache to run passed and my mind’s gears got to grinding. It used to happen like that on a really good run and I was giddy over the experience yesterday. My, oh my, it’d been a long time since my imagination slipped into writing mode that easily.

Idea after idea took shape for the novel I’m currently writing. Each one flowed from the one before it. All of it made me grin as I walked through my town and filled my lungs up with fresh air.

Three times before reaching home, I ran through each of the notes and scenes I was writing without a pen. I repeated them to myself in the order they’d come to me, and at the end of each round, more new material came. It was a feast.

When I arrived home, I rushed through explaining to my husband why I had to get to my notebook and pen. I had to write all of it down before any of it disappeared, as unrecorded ideas are apt to do.

I don’t know how long I spent writing. I don’t know why everything worked yesterday when it so often does not.

I know I have eleven pages of new, solid character and plot development and scenes for my novel. I know it was a walk to rival any of my favorite runs.

I’m grateful, and I can’t wait to eventually share this book with you someday.

Next up on the calendar is a Meet the Author evening at the Plymouth Public Library. Come join me at 6 p.m. on Monday, September 23rd for a candid discussion of my experience of writing and publishing my first novel The Hidden Legacy, and the pursuit of new projects. The journey of it is a shared experience with many individuals who chase their passion while still dedicating themselves to their relationships, families, and other work. I’d love to discuss your questions and curiosities, and learn from your experiences, as well. If you’ve read The Hidden Legacy, or simply want to know more about it, the floor will be open for conversaton on the book too. 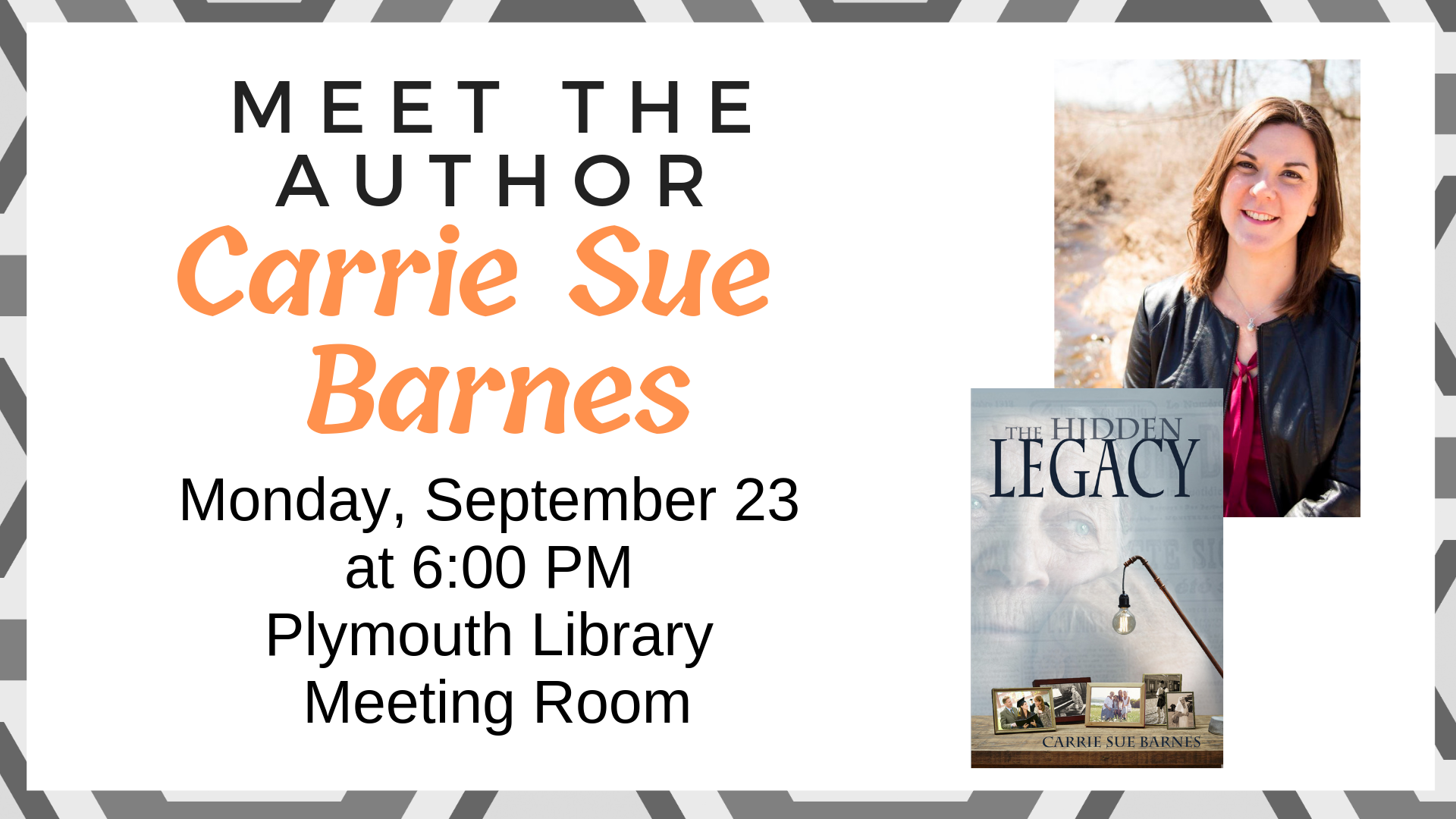 If you’re in the area (or anywhere near it!) on Monday, September 23rd, make your way to the Plymouth Public Library at 6 p.m. I’ll be ready to welcome you!

My collection of author-life experiences is limited. Growing, thank goodness, but still limited. It could be my lingering newbie status that makes the events of last Tuesday so edifying. Or maybe, no matter how long I’m on this adventure of establishing myself as an author, the shine will never wear off opportunities like these.

After dropping my kids off at school, I rushed up the rainy freeway to Manitowoc for my first radio interview! I walked into the building eager but nervous. Craig at WCUB 980 AM set me at ease though. Once we got rolling, the nervousness evaporated and I felt only the rightness of donning my author hat as I told listeners about The Hidden Legacy. You can listen to the podcast of my interview here. I wasn’t embarrassed while listening to it afterward, so I’m calling it a genuine win!

The primary reason I had the opportunity to interview on WCUB was to promote my author visit to the Manitowoc Public Library on that same day. That’s right! I didn’t have to remove that author hat after the interview. I kept it in place as I spent an hour with readers at the library. In the previous months, the library quite generously acquired about twenty copies of The Hidden Legacy and chose it for September’s “Morning Book Talk.” Rendering me both humbled and proud, I was told by the facilitor of the group that all twenty copies were checked out! I still can’t state that without grinning.

Ten individuals who had read the novel, along with Therese (the wonderful and helpful facilitator) and me, enjoyed a thorough discussion of the book, as well as my writing process. It was a dynamic, non-stop conversation that was the stuff of legit author-life. The group had numerous questions for me (we didn’t even touch the prepared discussion questions), and it was a special privilege to hear a few of them share their favorite parts of The Hidden Legacy.

I’ll wrap up this joyful post with a thank you to WCUB 980 AM and Craig on “The Breakfast Club” morning show for the chance to interview. An even bigger thanks goes to the Manitowoc Public Library for their ongoing support of authors and their promotion of literary arts.

Next up, Plymouth Public Library on September 23rd at 6 p.m. See you there, readers!

Those of you in the eastern/northeastern area of Wisconsin are invited to join me on Tuesday, September 10th at 11 a.m. for a book discussion at the Manitowoc Public Library. (Let’s be honest. You’re ALL invited, no matter where you live.)

I’ve updated the Events page with details about upcoming book-related happenings in September and October. Check it out and mark your calendars!

As well, keep an eye out for an announcement soon on how we’ll be celebrating the fast-approaching one year anniversary of the release of The Hidden Legacy. (Anyone enjoy a good GIVEAWAY?)

Until then, may you have good books, bright sunshine, and many reasons to smile!

I’m proud to share that The Hidden Legacy has been awarded the Seal of Approval (SoA) by the Catholic Writers Guild. Simply put, this signifies that the novel has been assessed for qualities that support and faithfully represent the Catholic faith. Sometimes this means a book was written specifically for a Catholic audience. Other times, like with The Hidden Legacy, it is written for a broader audience and its themes and plot make it highly recommendable to Catholic readers.

The SoA is a respected measure for Catholic bookstore owners and reviewers of Catholic works to be reassured that a book is worth their consideration.

With themes of authentic love, self-sacrifice, truth, and hope, The Hidden Legacy offers a story that can inspire and encourage you in your walk of faith. I hope you will consider it for your reading enjoyment!

I have a bit of an announcement to make. It is both happy and bittersweet. For nearly ten years, my manuscript has been created, nurtured, pruned, and grown under the title Full of Days. It was not the original title. The original title was a terrible, overly dramatic phrase I will not admit to here. Before the first draft was finished though, my little story had become Full of Days, and so it has remained… until now.

When I got into the nitty gritty of collaborating with the editor assigned to me by my publisher, she asked that I consider changing the title. The first time she asked, right there on the title page as her very first comment when the edits were sent to me, I mentally refused. She stated that title’s strength did not match the story’s strength. I frowned and muttered and thought how absurd the request seemed to be. The next time she mentioned it, I wondered if I should at least think about it. The third time she mentioned it, I’d spent a number of weeks reviewing her subtle changes and astute suggestions throughout the manuscript and had to humbly admit that maybe (just maybe) the editor knew what she was talking about. I don’t remember if there was a fourth mention. There might have been. I only know that by the time I reached the final page of the manuscript, completing my review of her work on my story, I was deeply grateful for how she’d sharpened the writing and developed my perspective on giving the reader the best possible version of the tale and characters I’d created.

Thus began my deliberation over the title. Oh, how I wrestled with it. By the time I sent a handful of title ideas to the publisher to get their opinion, I’d brainstormed and eliminated at least twenty possibilities. Always, in my mind, Full of Days was still in the running. It was a contender but not the guaranteed winner.

The goal was to create a title that captured the interest of a reader who knew nothing of the story itself. Someone who might be perusing books in this genre, looking for something new to intrigue them enough to at least read the back cover’s synopsis. The title needed to create curiosity and hint at the heart of the story.

Making the choice felt like renaming a newborn child after first deciding on a name quite early in the pregnancy. It was akin to spending all that time of nurturing and development calling the child by one name, then, upon meeting him face to face, realizing it simply is not the right name for him. It happens, and I imagine it is quite a bittersweet change to make in that moment. Such a change would transition from difficult and uncertain to happy and confident as the new moniker became familiar. That is exactly how I’d describe this process.

So, yes, after all that rambling, I am here to tell you that as of Tuesday, my upcoming novel has a new title! I invite you all to be on the lookout in the coming months for news of the release of the debut christian historical novel titled The Hidden Legacy.