Skip to content
November 7, 2010February 6, 2018 Carrie Sue Barnes
I think it’s a combination of the yard work yesterday and the significant but unresolved discussion last night about the growth of faith. I woke up today with the parable of the Sower in my mind. It’s one of my very favorite passages, possibly my favorite parable, but I haven’t read it in quite some time.
Jesus is speaking, yet again, to a great crowd. He stands in a boat, just off the shore, while the crowd assembles on the beach, eager to hear from this great and mysterious teacher. 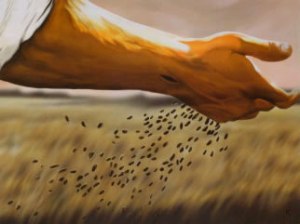 Later the crowd waits. Jesus is pausing in His preaching and His twelve disciples gather around Him. They question Him on His method. “‘Why do you speak to them in parables?’ And he answered them, ‘To you it has been given to know the secrets of the kingdom of heaven, but to them it has not been given.'” (13:10-11) They likely feel the weight of this privilege, but they realize that they too need help to understand what Jesus has told them. Later they will receive the powerful gift of the Holy Spirit to understand all truth (John 14:26; 16:13) and preach it themselves, but for now they depend upon Christ to enlighten them with His words.
Jesus knows this need and He proceeds to explain to the Twelve, “Hear then the parable of the sower. When any one hears the word of the kingdom and does not understand it, the evil one comes and snatches away what is sown in his heart; this is what was sown along the path. As for what was sown on rocky ground, this is he who hears the word and immediately receives it with joy; yet he has no root in himself, but endures for a while, and when tribulation or persecution arises on account of the word, immediately he falls away. As for what was sown among thorns, this is he who hears the word, but the cares of the world and the delight in riches choke the word, and it proves unfruitful. As for what was sown on good soil, this is he who hears the word and understands it; he indeed bears fruit, and yields, in one case a hundred-fold, in another sixty, and in another thirty.” (13:18-23)
There are so very many things that impress themselves on my mind from this teaching of Christ. I will keep myself to only two here though. One is the role of the Sower. The Sower of “the word of the Kingdom” is God, Himself. When we present ourselves to Him, admitting our need for Him and His Word, He sows. When we hear His Word proclaimed and taught, He sows. When we pray and entrust ourselves to Him, He sows. Even when we are not prepared, not certain, He sows. Faith is a gift of God. It is not created against our will and so we do hold a role in its inception in our hearts, but we cannot create it ourselves. We are to be soil, receivers of the seed of faith sown by our gracious and saving God. Pride would have us believe we can save ourselves. Woundedness would have us believe God will not come through. Modern mindsets would have us believe we can know all things by our own power. But it is God who created us and it is God who has made it clear that we need Him and His Word.
Secondly, the parable lays out a bluntly difficult scenario for those who receive the seeds of faith. Christ presents “whens,” not “ifs.” When the evil one attempts to steal away the seeds; when tribulations and persecutions come because of this faith; when the cares of the world and the desire for the things of this world rise up – these are not hypotheticals and the results when the faith has not yet taken root in good soil are not either. I’ve seen it and experienced it: the uprooting, the withering, the choking out. Good soil… understanding: this is the aim to be taken. To humbly open your heart and mind to truth as revealed by God and proclaimed by His teaching Church. To take up the work of understanding, of growing strong, lasting roots of faith. To let Him take hold by His Word. To “trust in the Lord with all your heart, and do not rely on your own insight. In all your ways make straight your paths.” (Proverbs 3:5-6) To avail yourself of the rich resources of faith. To be a member of the “household of God, which is the church of the living God, the pillar and bulwark of the truth.” (1 Timothy 2:15) To be good soil. And in good soil, oh the gloriousness of the fruit borne by those seeds sown by the Divine Sower.