I was in people-watching mode tonight but with little reward. Let others stare at their televisions and phones. There was nothing more fascinating than real life.

The restaurant was more than half-empty. Being a Tuesday evening, this was no surprise. The place was known for its steaks, lobsters, and oysters. Few folks knew the chef also made the finest potato and ham chowder in the city. It was an overlooked selection on the flashy menu.

At a table for two but with one place setting, under the west-facing bay window, I sat sipping the hot chowder and watching the sunset between the downtown brick 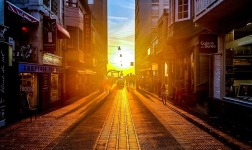 buildings. Day departed on the rosy orange coattails of the sun. I turned my head when the front door opened, allowing in two seconds of street noise. A couple stepped inside, all nervous glances and tight smiles. Uncertainty hovered over them like a hummingbird over a flower.

“Oh, do sit where I can see you,” I whispered over the spoon at my lips.

It was a first date, without a doubt. First dates made for wonderful people-watching. I always rooted for the evening to be a success. To witness that moment when the sparks ignite, when the nerves loosen and the smiles become real – it is a special privilege to see. But they can’t all be successes. The reward in watching then is the curiosity of how each party will handle the disappointment. I have witnessed grace and gentleness, cool indifference, outright rudeness, and desperate attempts to turn it around.

My eyes followed the couple to their table for two, against a wall beneath softly glowing sconces. They were young. Most people seemed young at this point in my life, but this couple had surely seen fewer than twenty-five years.

The girl wore a black wrap-dress and ballet flats. Her brown hair, a shade or two darker than mine was before it turned white, was flawlessly straightened and reached her shoulder blades. She’d accessorized with a simple silver necklace and matching bracelet. Her companion was clean cut, all-American good looks in a blue oxford and gray slacks. He pulled the chair out for his date before seating himself. I smiled my approval.

Their position gave me a clear view of the girl’s face. The boy’s back was to me but I knew there was value in the body language I’d discern nonetheless.

Except it was over before it’d begun. I saw it on the girl’s face.

The young man’s movements, leanings, and gestures grew more relaxed by the second. His forearms were on the table, his back and head tilted toward her whenever she spoke. He answered with lifts of his hands and plentiful words.

But I saw no change in her. No ushering out of the initial nervousness. No softening of the stiff shoulders. Her back leaned away from him, as if fastened to the back of her chair. Her slender hands remained clutched together in her lap, never lifting and never opening. I willed her to emote and engage, to allow her guarded expression to crack.

“You have already made up your mind, haven’t you, dear?” I shook my head and looked away.

Normally, I would continue my observations, curious to know how the tragedy would unfold. Instead, sadness washed over me and I had no wish to see more. I pitied the boy and, perhaps more so, the girl too. My waiter visited my table and I requested the check.

“Dessert?” he asked. “Or a cocktail to finish?”

“Next time, maybe,” I said. My gaze fell on the couple once more. “I’ve had quite enough for tonight, but next time may be better.”

As I paid my bill, I handed the water an extra twenty.

“Put it toward their meal,” I instructed, indicating the couple across the room. “And tell that young man those words. Tell him that next time may be better.”

*****
Let’s get back to basics, my friends. Specifically, the alphabet. I’ll be writing a series of flash fiction pieces off of one word prompts, from A to Z. Enjoy! And if a word comes to mind for any upcoming letter, please make your suggestion and I’ll consider it for a prompt.