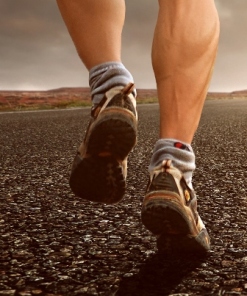 Harold’s run stalled outside a brick bungalow on Cedar Street. The skyline was rimmed pink, with everything above still ink and stars. Daily, before dawn, Harold ran one and a half miles at an eleven-minutes-per-mile pace. Every single morning, except Sundays, and he did not stop for anything mid-run. Never.

“You’re seventy-two. It’s okay to slow down,” Harold’s doctor said at his most recent check-up. “Maybe mix it up with walking or swimming, something a bit easier on the joints.”

Harold lied when he told the doctor he’d consider it.

He checked the tracker on his wrist. The device was a gift from his son. Harold had scoffed at learning its features and tricks, or even growing comfortable with its bulk around his wrist. He was loath to admit to anyone how much he appreciated it now, with its details and data and graphs, its uncanny ability to measure the value of his daily movements.

Eight-tenths of a mile to go.

So, why had he stopped? Why did he stand, feet planted on the damp sidewalk instead of striking it at his self-regulated pace? He stood still because he was traveling through time, and travel like that tends to take a person’s breath away.

Inside the house, on display through a wide picture window, was a diorama of the past. A living room: white walls, gray sofa, black recliner, and two lamps glowing from each of the end tables framing the sofa. Family photos in frames. A book on the arm of the recliner.

A woman and a child.

Harold’s pulse throbbed. He felt it in his chest, in his neck.

“My girls,” he whispered.

The woman – slim, average height, pixie-cut chestnut hair – stood in the center of the room, her arms wrapped securely around the child lying against her, chest to chest. Her head was bowed with her cheek resting on the crown of her daughter’s blonde head. Her eyes were closed.

The child’s face was turned away from the window, tucked into the curve of her mother’s neck. She looked to be two, perhaps, clothed in plush, yellow pajamas. One little hand held the ears of a well-loved, stuffed bunny, and the other hand rested on her mother’s shoulder.

All was still. A three-dimensional snapshot of thirty years ago.

Harold reached for the tree branch above his shoulder. The coarse bark beneath his palm broke the spell over his senses. He pulled his eyes away from the house, away from the intimacy of the moment between mother and child, and forced himself to move.

At the end of the block, where Harold typically turned left to return home, he turned right. Then he turned right again, then left. He jogged into the cemetery, along the gravel paths to a headstone beneath a birch tree. There, he kneeled.

Harold waited for his heartbeat to slow. He laid his hands in the dewy grass and squinted at the sun mounting the treetops.

“I saw you today, Rosie.” He cleared his throat. “I used to see you everywhere. Everywhere. But it hasn’t been like that in a while. It was you and Sadie, when she was just a little thing. It was our living room. I mean, I know it wasn’t. I know it wasn’t you, or Sadie, or our home. For a moment though, it was, and it was the happiest and the saddest I’ve been in a while.”

He leaned forward on his knees, pressing his palms into the cold, solid stone. He rubbed the ridges of her name with his thumb and sighed.

“It was wonderful to see you.”

*****
Let’s get back to basics, my friends. Specifically, the alphabet. I’ll be writing a series of flash fiction pieces off of one word prompts, from A to Z. Enjoy! And if a word comes to mind for any upcoming letter, please make your suggestion and I’ll consider it for a prompt.