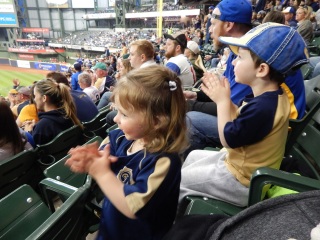 This is one of my favorite photos. Sure, I have others that better capture my children’s faces and smiles. This one, though, captures life.

Some things have me thinking hard on the matter of life. It started with the suicide bomber cruelly choosing the concert in Manchester as his target and killing twenty-two adults, teens, and children. It continued with the news of the twenty-eight adults and children violently martyred in Egypt when they refused to deny their belief in Christ. Numerous others were injured in these attacks. Countless more were directly affected and traumatized.

And so, I think about life. Life as it is now, in this world in which my husband and I are raising our little children. In the midst of this thinking, I came across that photo. It’s a recent one, taken at my kids’ first time at a major league baseball game. All I have to do is look at it and I relive that night. We bought the tickets on a whim when we saw a low cost deal for some upcoming games. I was excited, as I always am when I attend a baseball game, but I was also worried. Would the kids enjoy themselves or be overwhelmed by the size and the noise of the place? Would they get bored and whine? Would they complain about having to stay in their seats for too long? Would they be too tired the next day? Typical motherhood worries.

My worry was silenced by their wonder: the wonder on their small faces when we entered the stadium; when the crowd stood clapping for the first time; when the fireworks were lit to celebrate each home run; when my son kept his eyes on the pitcher and batter as I explained  a little of the game and he was rewarded with witnessing a hit to the outfield; when the racing sausages and the 7th inning stretch brought everyone to their feet in unity. The pair of them enjoyed every minute. They were thrilled at being part of something so much bigger than themselves.

So many things could have gone wrong. They didn’t, but they could have. I think of the dozens of concerts my friends and I have attended from the time we were teenagers to the present without a doubt that we’d arrive back home safely. I think of the pilgrimages we’ve made to churches and retreats without the looming threat of being attacked for our beliefs. I think of the number of people in that baseball stadium with no thought of whether or not someone might make us a target. So many things could go wrong.

1 thought on “The Heart of Life is Good”