Photo/Writing Prompt: Black & White
*Disclaimer: The title is not the actual location of this picture. It’s a fictitious address for the purpose of the story. 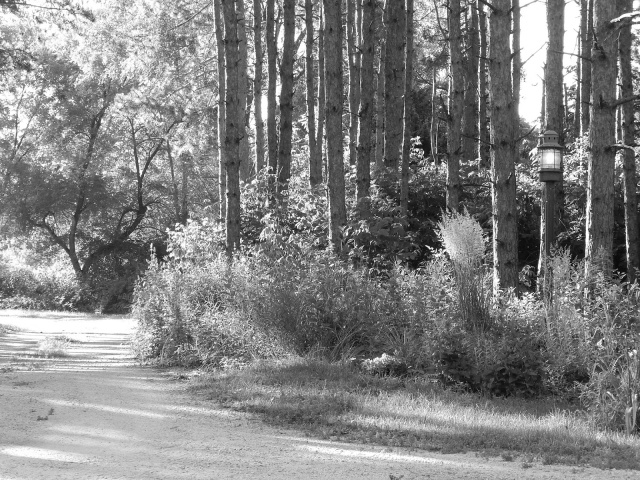 The solitary lamp post at the end of the dirt drive was encompassed by wildflowers. They stood tall and bristly with names unknown to Tate. Tate stopped at the edge of the road, a narrow two lane stretch of countryside cracked pavement. He fixed his green eyes on the dirt path in front of him. Plenty wide enough for a car yet not a trace of tracks upon it. No divots typical of gravel driveways from the repeated passing of the same vehicle day after day. Nor were there any fresh disturbances of the dust and pebbles to signify recent activity. He stepped sideways to the crooked mailbox. The rusted door creaked as it was opened just enough to see inside. Empty. He checked the blue numbers painted on its side again.

Yes, that was the address he was given and this was the only Marley Road in the county, or any of the neighboring counties. He’d checked. Tate rubbed the scruff that grew over his cheeks and chin in the last two days. He had packed his bag in a hurry and his razor was forgotten.

A breeze wafted through the trees, rustling the leaves like the sound of a dozen whispering children. The wildflowers’ heady scents rose to his nostrils. The early sunshine was warm already and Tate wiped away the bead of sweat trickling down the back of his neck.

His eyes kept returning to the lamp post. It was lit. Someone is here, it announced. A solemn, proud butler at the entrance to his master’s home. Can I help you, sir?

Yes, someone is here and by God, I certainly hope you can help me. Tate nearly answered aloud before laughing uneasily at himself.

Elections; earthquakes and hurricanes; Afghanistan and Iraq. Tate had covered them all and much more. He’d followed each story wherever it led, to whomever it led, until his pen was satisfied. None had tortured his nerves like this one. 27 years. That’s how long he’d followed this story. 27 years of questions, theories, interviews, leads – some adding a piece to the puzzle, some detouring him from the right path.

27 years to bring him here. 3001 Marley Road, Black Mills, Wisconsin. A lamp post and a dirt drive and a house beyond the trees in which, if he finally had it right, Tate would find the brown haired girl he watched get kidnapped when he was 7 years old.